History of Hampton and America's Story 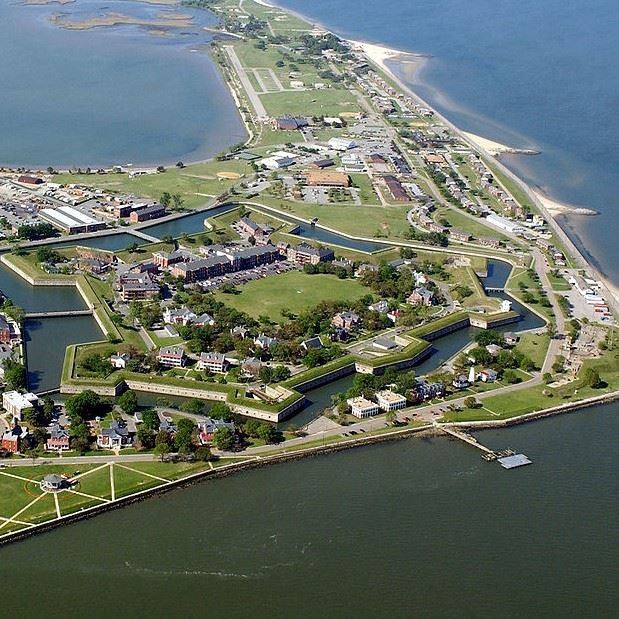 Founded in 1610, Hampton is a city of firsts — the first continuous English-speaking settlement was established here, America's first free public education was offered here, and NASA trained its first astronauts here in Hampton.

Hampton’s unique setting at the confluence of the Chesapeake Bay and the James River has positioned it at the forefront of fundamental milestones in our nation’s history.  The best stories tell sweeping narratives through the personal accounts of individuals and communities involved in dramatic events. The history of Hampton, a small southern city, has the ability to illuminate the arc of American history in a unique way, at once personal and complex, and fundamental in America’s early settlement, education, slavery, war, and modern technology and innovation.

For thousands of years, native peoples relied on the abundance of seafood, game, and crops harvested from the region’s rich natural resources. The Native American settlement of Kecoughtan was one of the jewels in the crown of Powhatan’s powerful confederacy on the eve of Europeans’ arrival. For as long as humans have inhabited North America, the tip of Virginia's Peninsula has been coveted for its beauty, abundance of natural resources, and favorable location.

From the inception of English settlement in America, Hampton and Fort Monroe's location made it vital as a military stronghold and source of natural resources. Point Comfort, the site of Fort Monroe, was used for strategic defense of the Chesapeake Bay beginning in the earliest days of European settlement in North America. Captain John Smith and the Virginia Company built Fort Algernon on what is now Fort Monroe in 1609. During that winter's "Starving Time," Jamestown colonists starved while settlers at Point Comfort feasted on abundant seafood.

By summer 1610, Virginia Company leaders, eyeing Hampton’s prized location and fertile soil, attacked the native community at Kecoughtan and planted a civilian English settlement, making Hampton the site of both the oldest continuous community in English America and the first episode in a centuries-long practice of violent Indian removal. As England's foothold in America expanded, Hampton became the primary outgoing port for the James River tobacco plantations that fed England’s budding commercial empire.

In 1634, colonist Benjamin Syms bequeathed land, cattle, and tools for starting America’s first “free school” to educate local children at reduced or no cost. Hampton City Schools continues to benefit from the proceeds of the bequest and is America’s oldest educational institution.

Hampton’s location positioned it to witness both the beginning and end of African American slavery. In 1619, English privateers arrived at Point Comfort with a cargo of Africans, selling them in exchange for food and supplies. Of these first Africans in English America were Anthony and Isabella Tucker, who gave birth to William Tucker, the first child of African descent born in English America.

After the War of 1812, the United States built a series of coastal fortifications to defend the Chesapeake Bay, including Fort Monroe on the site of the original English fortification at Point Comfort, and Fort Calhoun (later Fort Wool), to guard the mouth of the James River.  The fort’s construction was begun by employing the labor of enslaved people, who were gradually replaced by military convicts. The granite for the walls came from rock quarries in Virginia and Maryland, while the other building materials were supplied by local contractors. The fort covers 63 acres of land with its walls stretching 1.3 miles around. Completed in 1834, the stone fort is believed to be the largest ever built in the United States. Forts Monroe and Wool remained in active service into the 20th century, playing a vital role in defending against German submarine attacks during both world wars.  Fort Monroe served as an active U.S. Army installation until September 15, 2011.

The End of Slavery

Almost 150 years after the first Africans were brought to Hampton in 1619, Fort Monroe was the site of the “Contraband” Decision, through which local enslaved men and women defied the institution of slavery and succeeded in challenging the Federal Government’s unwillingness to interfere with slavery early in the Civil War.  In May 1861, three enslaved men arrived at Fort Monroe to petition the Union commanding officer for protection.  Turning the men’s legal status as property on its head, Maj. Gen. Benjamin Butler determined the three slaves were “contraband of war,” property being used by the enemy, and refused to return them to their legal owner.  Within weeks, thousands of refugee slaves had flocked to “Freedom’s Fortress,” making Fort Monroe the site of the first step in slavery’s collapse.

The First Contraband Camps in America

As the Civil War continued, the “Contraband” Doctrine formed at Fort Monroe became the basis for a series of Confiscation Acts passed by Congress and capped by the Emancipation Proclamation, tying the end of slavery to the Union’s expansion across the South and definitively shifting the meaning of the Civil War from Union to Emancipation.  Communities descended from refugee slaves’ camps remain in Hampton today, and following the Civil War the Freedmen’s Bureau and northern missionaries established what is now Hampton University; to educate former slaves.

Hampton’s strategic location made it the site of significant events in the Revolutionary War, War of 1812, and Civil War.  In 1775, British ships attacked the Virginia Navy ported at Hampton and were repelled by local militia troops.  Thomas Jefferson reported that the Battle of Hampton “raised our country into a perfect frenzy” and galvanized Virginians’ support for declaring independence from the British Empire.  During the War of 1812, English troops pillaged the town of Hampton before making their way up the Chesapeake Bay and burning Washington.

To Space and Beyond

During World War I, Hampton also became the site of the United States’ first aeronautical laboratory, when the National Advisory Committee on Aeronautics selected a rural portion of northern Hampton over several other sites for its railway and waterway access, proximity to Washington and nearby shipbuilding industries, flat terrain, and favorable climate.  Now NASA Langley Research Center, many scientific and engineering breakthroughs have been made at the site, and training for the original Mercury 7 astronauts and subsequent lunar landing missions took place there.

Today, the people of Hampton are the product of the town’s storied history.  The local population includes descendants of original English settlers and African-American slaves, northerners who came to Hampton to invest in its natural resources after the Civil War and founded its quintessential seafood industries, southerners with old local roots, Contraband refugees who made their way to Freedom’s Fortress, and families brought here by military ties to Fort Monroe and Langley Air Force Base.  Its natural setting continues to attract visitors, military families and retirees, and locals alike, even while its distinctiveness is threatened by projected sea level rise over the next century.

To learn more about Hampton's 400-plus years of history, visit the Hampton History museum page.