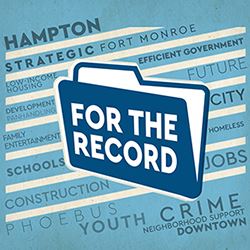 People in Hampton have a lot of questions about what their government is or isn't doing. For the Record is a place to gather those questions and provide answers. We want more people to understand the facts -- what has been done, what is being done, what isn't being done -- as well as the rationale behind the city's position. Whether you want a short, quick explanation in a video clip or a longer, in-depth study of an issue, look here as we roll out topics throughout the year.

Have a question you want answered? Email it to us.