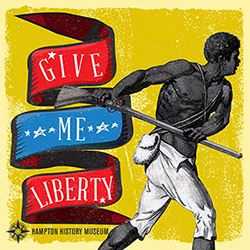 Give Me Liberty: Fugitive Slaves and the Long Revolution Against Slavery

Explore the lives of over 30 fugitive slaves from Hampton who made journeys to freedom or took up arms against their enslavers during periods of war. This groundbreaking exhibition shines an inspirational light on their experiences as part of a powerful slave resistance between the Revolutionary War and the Civil War.

The exhibit especially focuses on the Black Loyalists (American Revolution) and Refugees (War of 1812) in Hampton who achieved liberty by joining forces with the British Army and Navy. Between these wartime enslaved people in Hampton continuously resisted by taking flight. Through their revolutionary actions, fugitives not only freed themselves but fought against enslavement, ultimately helping to end slavery permanently. The exhibition concludes with Hampton's Contrabands, who escaped to Union-held Fort Monroe during the Civil War, and the role they and other fugitives played in slavery's abolition.

Accompanied by imagery culled from institutions throughout the nation, Europe and Canada, a wide-range of artifacts from the museum's collection and other museums illustrate the struggle for liberty. Some of the items displayed include: the swivel gun from the HMS Liberty, a vessel that played a key role in the 1775 Battle of Hampton; a door lock, key set, ceramics, axe head, scissors and toothbrush from the residences of Black Refugees in Nova Scotia; a Revolutionary War-era naval pike of the kind used by black sailors fighting on both sides in the American Revolution; anti-slavery ceramics with images of an abolitionist nature; an 18th century Rutherford rifle used during the War of 1812 by the Virginia Militia for fighting the British, as well as for patrolling for fugitive slaves; and a U.S. Navy button and tools discovered during archaeology of the site of Hampton's Grand Contraband Camp in 2014.

The exhibit features several interactive elements. Visitors can try their hand at playing after watching a video demonstration of musicians performing British and American field and camp music. Another station explores the role of the drum in African and African-American resistance and features a djembe, a goblet-shaped hand drum. The importance of knot tying is explored through hands-on challenges in the gallery since joining with the British could lead to a new life as a sailor. A cipher wheel offers visitors the opportunity to decode and create secret messages, as fugitive slaves often acted as spies on both sides.

Through the stories of fugitive slaves, the exhibition explores three themes: